a bit hard but worth a try

wow this game cool but a little bit hard

Really nice game. The graphics are simple but effective. I wish there was a bit more juice to the dice and the pan! I felt like they lacked some physicality (esp in the way they moved, very glidy), and it's everything to this kind of experience. Some sfx on the dice rattling around would do great to add to this as well.

I like the theming. I like the design of the game. I think recontextualizing the action of rolling the dice as the core of the gameplay, wherein it's not a means to randomization but where it's something to be mastered (as an action in itself), and the use of that unusual tool to do that... This is extremely clever. Almost the essence of innovation to me. So much of it is about recontextualization.

The scope is very well mastered. I think the scoring mechanics are smart as well; tying the difficulty curve to the score, the tip to the speed with which the order is completed, it all feels very natural but it serves the flow of the game well. It felt very satisfying to see my progress through the fact that I started receiving orders with three dice in them, which I hadn't seen yet.

The control we have upon the dice feels a bit wonky. I know this is by design, but what I mean by that is not that it's hard to move them around precisely with a pan. (It is, and that's the point.) What I mean is that I wish we had more control, or more ways to master this control over the dice roll. I did manage to improve upon my score after ten plays, but I don't think I have made much progress with the game! I think I have made some progress, but I really lack any consistency. And more importantly, I'm not sure how many tools the game really gives us to improve upon that consistency and efficiency. Maybe more techniques? More control over the pan? Some other tools, like perhaps a spatula or pincers? I felt at the mercy of the game here, like I was just inefficiently rolling the dice in a rather ineffective way.

But this is not much of a problem, because I almost feel like that's very  thematic. I didn't really control what happened, but that's the point. I was rolling the dice, not selecting the right faces. Sometimes I was, well, just rattling the dice around hoping they'd land on the right faces, or throwing out some dice hoping the new ones would come with the right face up. But isn't that super thematic? We're talking a game about dice rolls. Of course it should have some randomness to it.

The level design is clever. I liked the use of different dice colours, first as an aesthetic element, but then as part of combinations of dice as a way to control more finely the difficulty of the orders. Very smart. The colour change on the dice and the little VFX with a ding whenever you get the correct combination is a great way to mark the completion of a level! 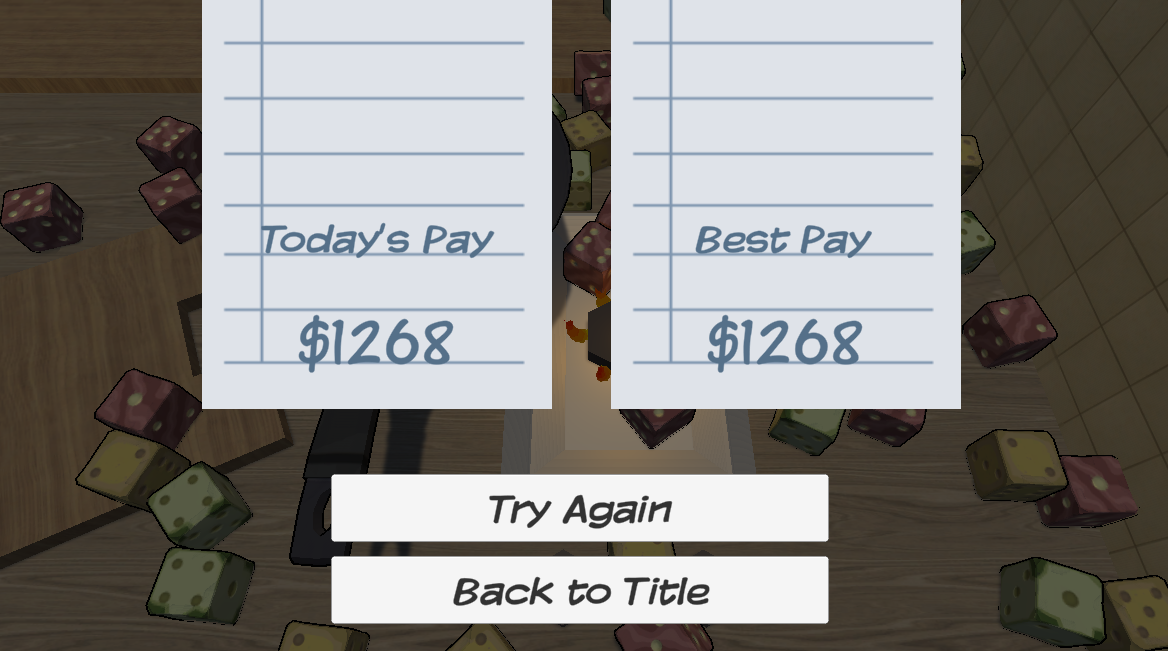 what a game! enjoyable to play. youve made a wonderful game experience with a really simple mechanic!

Brilliant, easily one of the best games from this jam I've played.

I very like the concept and the graphic ! I love cell shading and that match with the chill vibe... even if it's really dificult with two dice ^^'

I just think the control of the pan are a little bit sensitive, but that's my opinion.

I have a soft spot for cooking themes in games, and the simple but satisfying action of flipping something in a pan works so great for dice, I love the low slippery (buttery) friction here. High Score $608. Nice work!

This is surprisingly fun. I can see this being a mobile game with gyroscope controls!

One minor nitpick: sometimes the dice spawns with the correct face up, giving me a point without me having to do anything

A simple but creative concept !

At first it seems like it's all about luck... but after my 3rd game I become a little better at the manipulation and it feels very good to accomplish some orders with pure skill.

Congratulation for your work, it's not perfect but i liked it anyway !